Hi! Pinegrow 1.24 is available for download. It has important bug fixes and improvements. This is a free update for all existing users. Trial users will get fresh 7 days to try it out. To update, simply download and install the latest version from pinegrow.com. Below is the list of changes with a bit of extra details added

Pinegrow 1.24 is available for download. It has important bug fixes and improvements. This is a free update for all existing users. Trial users will get fresh 7 days to try it out. To update, simply download and install the latest version from pinegrow.com.

Below is the list of changes with a bit of extra details added so that it is not just a boring list of bugs.

No data-pg-id attributes in Preview and copied code

Pinegrow uses data-pg-id attributes internally to map DOM elements to their source-code representation. These attributes are removed when you save HTML files, so that you get clean code without any Pinegrow artefacts.

With 1.24 update you get clean code also when you preview page in external browser and when you copy the code from the edit code view.

Inline edit (double-click or Actions -> Edit content) works by using browser’s contenteditable mode on the closest parent div, section, table or body element. Depending on your layout this can cover quite a large section of the page. For example, if you have a column that contains hundreds of paragraphs of text and double-click on one paragraph, the whole column will go to inline edit mode and with each change you make Pinegrow will have a lot to do to map edits back to the source code.

Release 1.24 reduces the amount of processing that happens for each keystroke. Hiding the tree view can also increase responsiveness.

What if the page doesn’t load?

If you’re stuck on Loading, please wait… screen the most likely reason is that Pinegrow’s internal web server is not accessible. On some systems localhost is not defined, so Pinegrow now uses 127.0.0.1:port to address the internal web server. Another reason is that default port 40000 is not accessible. Go to Support -> Settings and try setting another port, for example 9000.

If files still don’t load please go to File -> Developer tools (only in upgraded version) and copy-paste us the output of the Console tab. 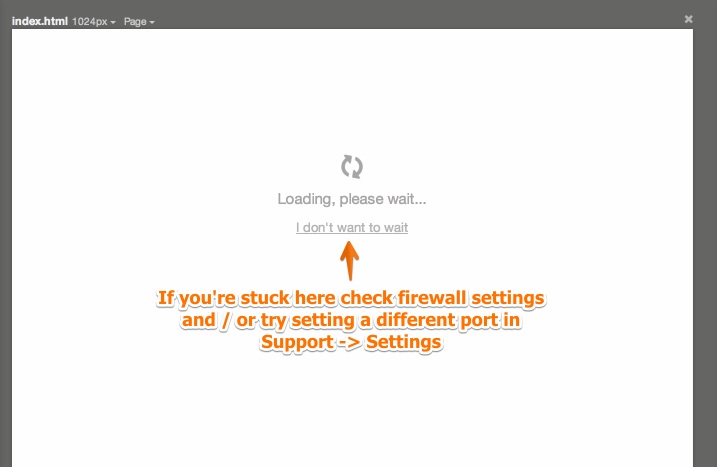 Producing clean HTML code is the top goal of Pinegrow. Code for formatting HTML was completely rewritten as part of the new source manipulation engine in release 1.2. While it tries to be smart and sensible in choosing how to format the output code, it is quite possible that it doesn’t do this job perfectly in certain situations. If you run across any formatting mistakes, please let us know and send sample code.

Sync between Edit code and Page view was inconsistent

Edit code mode tried to be smart in mapping changes made to the code back to the live page view. In fact, it was too smart! In some cases it didn’t detect the changed element correctly and this resulted in unwanted artefacts or missed updates on the live page view.

With 1.24 the smart Edit code went back to the lab. In its place we have a simple sync that simply copies the whole code to the page with each change. On large documents this can cause performance issues. Workarounds are closing the tree and using Actions -> Edit code on selected elements to edit the HTML code of just that particular element and its children.

Another issue that can come up is page being reinitialised on every edit code change. For example, it the page contains loader overlay, the overlay will be again displayed over the page. Refresh (CMD + R) will fix the page view if it get messed up.

Editing CSS rules with multiple values for the same property

When edited with UI CSS properties editor in CSS tab, only the last instance of background-image would be accessible. In fact, all other instances would not even be included in CSS code generated by Pinegrow.

In release 1.24 Pinegrow handles such rules correctly and doesn’t allow the rule to be edited with UI properties editor. Instead it opens the rule in Edit rule code view.

Due to the way how Pinegrow forms urls for local files it can’t open files with path that contains characters ;?#&. Please rename such folders to use them with Pinegrow.

That’s all for now!

All the best, Matjaz